I can completely understand the temptation for brand owners to borrow packaging architecture from another category, but I believe Diageo decanting whisky into an aftershave bottle – and licensing David Beckham branding to try to make Whisky “cool and trendy” for a new generation – betrays a triumph of opportunism over consideration, which can only destroy brand value.

Putting aside whether it’s a good idea for children to see their dad pouring out a drink from an aftershave bottle (while their mum dabs a bit of Dior “Poison” behind her ears), Haig is one of the oldest and best known Scotch whisky brands in the world with one of the most recognisable bottle shapes in its Haig Dimple.

Diageo owns an enormous portfolio of Whisky brands, and it is certainly tough to balance the need for innovation, consumer acquisition, and the responsibility to preserve its brands’ heritage and authenticity for the next generation. Haig has always been a very accessible, easy-to-drink whisky so this Single Grain variant makes a good choice to target new drinkers.

In this case however, the company appears to have abandoned hard earned brand equity in the hope of a quick win. This new bastard son of Haig goes far beyond “pricking the pomposity” of the old school and “having a bit of fun” by associating with those well known brand gurus David Beckham and Simon Fuller. Beckham of course is famous for being happy to put his name to brands – from underwear to phones to hair-gel – whether relevant or not.

The one bit of good news though is they may get some extra PR – as a new generation try to emulate England Rugby’s Colin Smart and his infamous 1982 after-shave-drinking episode.

In response to questions on Experiential with Alpro

… For us, sampling is done to challenge public perception of the brand. Many consumers think Alpro is going to be strange and unusual due to the idea, promoted years ago by the industry, that its just like dairy milk; when it has its own unique flavour.

We have to get the right message and product into the consumers hands and do it at the right time. Our morning sampling campaigns in commuter hotspots are all about breakfast so we provide a breakfast bag not just with the product but also with cereal and a spoon and some literature. In the afternoon its a dessert occasion so we provide pudding.

We have to provide the whole experience. If we just gave a sip cup from a stand the consumer would walk five yards and forget about it. We have one chance and it has to be a high quality interaction. The team we have working on our stands at

stations or festivals have been doing it for years so they know our brand. We audition them so that they can prove to us that theyre engaging, friendly people who can relate to our audience.

The joined-up campaign is crucial. You have to take the consumer on a journey from the TV ad to the stand, through to engagement and sharing with peers. Feedback through social media is giving people a reason to continue the conversation with us. We use a variety of mechanics and test them all – coupon redemption, competition entries, research on station platforms. Above all, its the quality of the experience and the sample that is key.

One issue companies face is to communicate with specific groups of consumers, but to keep this discrete from other groups who may view the information as  confusing or even as a negative positioning for the brand.

A good example of this is Alpro,  who has created a good on-line resource for  people who think they might need to avoid lactose or go dairy free, without presenting the brand as medicinal or pseudo-medicinal to the general public- who are only just coming to terms with Alpro as a mainstream choice.

By using a “segmented gateway” to the Alpro Lactose free pages, http://www.alpro.com/uk/lactose-dairy-free  only those vistors who have specifically searched for lactose or dairy free, (or been directed from a relevant site) will see the resource. Visitors who enter via the home page or recipe pages will not normally see this content (unless they have previously visited it).

Google Chrome browser market share in May 2010 was over 7.0% for the first time – up from 4.6% in December 2009. [source: Net Applications]  Clearly, something they’ve been doing has led to an increase in awareness and trial… Perhaps congratulations are in order.

Chris Collis is a Chartered Marketer and Director of Marketing Walk, an independent Marketing Strategy and outsourcing house.

There’s been lots in the news this week about attacks on Google accounts by unknown hackers somehow linked to Chinese Authorities.

Now I may just be constructing conspiracy theories here, but then again …

13th January 2010: Google complains that [Chinese Government or its agents] have hacked into Google accounts of dozens of Chinese Human Rights activists and it is considering withdrawal from China. It made a Global public statement before even discussing this with the Chinese authorities.

14th January: Microsoft accepts that the hackers used a weakness identified in Microsofts browser Internet Explorer 6
Microsoft confirms these were highly targeted and sophisticated attacks  by highly motivated people. It is working on a security patch, and does not believe this will have major implications for the vast majority of its users.

15th January: McAfee chief technology officer George Kurtz explains that the code required for other hackers to target the vulnerability has been published on the web.

15th January: German Federal Office for Information Security advises its citizens to try another browser until the flaw is patched. This information circulated globally by news organisations.

How does Google know these people are Chinese human rights advocates?  Has it been reading their G-Mails?

Would it be easy to predict that The Chinese Government would not comment on the hacking allegations, and that (based on prior experience) Western opinion will automatically assume that they are the guilty party.

Who advised the German Government to intervene with a statement advising consumers to trial another web browser, at a time when Google was advertising heavily across Europe?

Would Google have been aware of (or been looking for) vulnerabilities in their competitor Internet Explorer before this attack?

Would Google be capable of a highly targeted and sophisticated attack by highly motivated people on its number 1 competitor?

Would Google risk its position in China to generate huge trial of its new Browser in the rest of the world?

It must be very difficult for Google to persuade consumers to switch from their usual browser.
One of the best ways to effect change is to make the Status Quo look like the scarier option.
Ill leave you to draw your own conclusions and point the finger where you will, but this all seems to have fallen into place very neatly for Google doesnt it?.

Or am I just being Evil ?

Chris Collis is a Chartered Marketer and Director of Marketing Walk, an independent Marketing Strategy and outsourcing house.

In response to David Cameron (and other’s) statements about “[irresponsible manufacturers advertising their brands]” following UK publication of House of Commons Health Committee report on Alcohol:

I have much sympathy for the House of Commons Health Committees concerns about the consequences of binge drinking which are a cause of many serious accidents, disorder, violence and crime; [and] also long term heavy drinking which causes more harm to health. 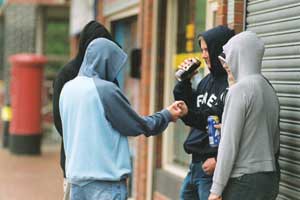 Its very easy for politicians to go for a one-line sound-bite from a 140 page report and scapegoat manufacturers and advertisers; but the problems of obese-cider-swilling-teenage-neer-do-wells congregating on street corners is a much deeper societal issue than can be solved by a bit of tinkering with advertising regulation. The Health Committee itself recommends that the top issues to be addressed are over-availability and minimum pricing; with some tightening of the scope and process of existing marketing regulation, particularly around sports sponsorship.

My own experience working in both childrens marketing and alcoholic drinks (not at the same time!) confirms that both markets are highly and effectively regulated in terms of product development, labelling and particularly advertising.

Some of the most effective moves in childrens food and beverage marketing recently have been self-imposed by manufacturers aiming for a healthier competitive edge in targeting children and their mothers, and improving listings in major retailers. These moves have largely been in response to trends in consumer attitudes (eg on artificial colours and sweeteners).

The Drinks industry has a history of self-regulation through the Portman Group, and ASA/BCAP codes of practice are very specific about the protection of children and promoting responsible drinking. However, it is also time to recognise that problem drinkers reflect society’s attitude to alcohol, and until this perception is effectively challenged, until it becomes socially unacceptable to spend Friday nights staggering vomiting and urinating in high streets, then tactics such as minimum pricing, licensing restrictions and advertising restrictions will be simply temporary sticking plasters.

Education, information campaigns such as DrinkAware, and labelling will not change short term behaviour, but they can change attitudes and lay the ground for initiatives such as the recent St Neots Community Alcohol Partnership* to successfully tackle this important long term issue in a holistic way.

It is time that Politicians recognized that manufacturers and advertisers can be a force for good in this society and work more closely with us. We are not the enemy. We have teenage children too and want to live in a healthy happy and secure society.